It all started with the vegetable garden. A friend told my husband, Jack, that “rabbit tea” made the best fertilizer. Amazed at the vibrant green vegetables that came from the first batch, we heartily agreed.

“If we had our own rabbits,” Jack surmised with glee, “we’d have an unending supply.”

That weekend the classified ads presented the perfect solution: “Large hutch & Mini Lop Rabbits—Free to good home.” We had no idea what a Mini Lop was but fell in love at first sight. Three lightly mottled rabbits with pudgy faces and small floppy ears were in their new home by nightfall. We named the mother Ginger, and her two children Pepper and Cinnamon.

The semi-tame rabbits were very gentle with our four year old daughter, Zoe. She loved to reach into the hutch and pet them, but they’d squirm when we held them. So Jack made our small back yard rabbit proof and we let all three roam and forage during the day. Zoe enjoyed playing with them in the yard, but every night Jack and I scrambled to catch each frisky critter and put them back in their cage.

The hutch was one large long wire cage that sat several feet above the ground on wooden legs. Gathering the Rabbit poo easy, but moving the rabbits in and out was not. They were smart buggers and didn’t like to be caught. So Jack made a sturdy wooden ramp they could run up and down instead.

By the time we realized that Pepper was a boy and divided the hutch into “his” and “her” sections we already had our first batch of babies on their way. Females are pregnant for only 31 days before giving birth. We provided straw and shavings for the girls around the estimated delivery time, but they ignored it until the night before giving birth when they pulled out large quantities of their fur and created voluminous soft nests. Each doe had two babies, and by the time they were three weeks old we had four cute little fluff balls to play with. Pepper was confined to solitary on his side of the hutch and had to take turns being in the yard without the girls.

We eventually sold the babies for $5 each. While the entire experience had been fun, we weren’t going to let that happen again.

One afternoon a few months later I went out in the yard to put the girls back into the hutch and was shocked to see a third rabbit that was not Pepper in the yard with them. Our rabbits couldn’t get out, but this frisky little guy found a way in. Who knew Santa Barbara had rogue rabbits? I put the girls in the hutch, and waited for Jack to get home to discuss what to do, but the next morning our unwelcome guest had disappeared on his own. We never did figure out his secret entrance, but 31 days later we had another, larger litter from each girl. 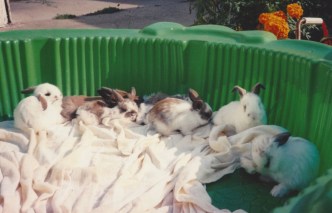 Zoe was thrilled. She loved all her little bunnies and would name each one. Her favorite of the seven new babies was a fat rolly polly little guy she named Bunny-Buns.

Once again we found homes for all of the little ones.

One morning I went to let Pepper out for his turn in the yard, but he didn’t budge. Speaking softly, I nudged him and found he was stiff as a board. I burst into tears and ran into the house. Zoe asked what was wrong. I said “Sweetie, Pepper’s dead!” I reached out to comfort her but she pulled away and replied matter-of-factly “Oh Mom, it’s just a rabbit.” I stopped crying and just stared at her as she calmly went back in to her room to play. Oh well. Now Ginger and Cinnamon could be out in the yard all day.

A couple months later on a cold foggy morning I went to let the girls out of the hutch and found huge furry nests beside each of them. Four fragile newborn bunnies were lying directly on the cold wire grate with five more babies safely inside one nest; the other nest had four more wriggling newborns.

I immediately scooped up the still, icy forms of the four outsiders and ran into the house. “Zoe!” I yelled as I ran to the gas wall heater and tried to warm them. “The rabbits had babies!” Our hearts leapt as the little ones began to stir. . . . all but one of them lived. I put the three squirming newborns into the nest with their five warm brothers and sisters, and Ginger begrudgingly accepted them all. Cinnamon only had four in her nest. 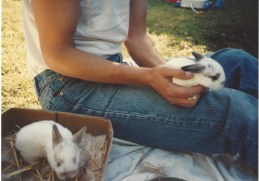 Female rabbits don’t go into heat—they are always open to male advances—so there’s no natural rhythm to their breeding. This time some phantom male had found his way in and out of the yard without our notice.

Ten Weeks later, much to Zoe’s dismay we once again found homes for all of the bunnies. Fortunately, we found a preschool that wanted six. 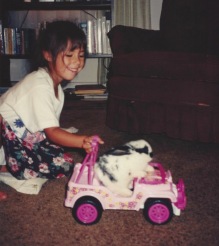 This was also the end of our time with Ginger and Cinnamon. By now we had more rabbit tea than we knew what to do with, and Jack and I were definitely done raising rabbits.

An ad was placed in the paper: “Sweet female Mini Lops with large hutch—free to good home.”

We smiled and waved as we watched the unsuspecting new owners happily cart them away.